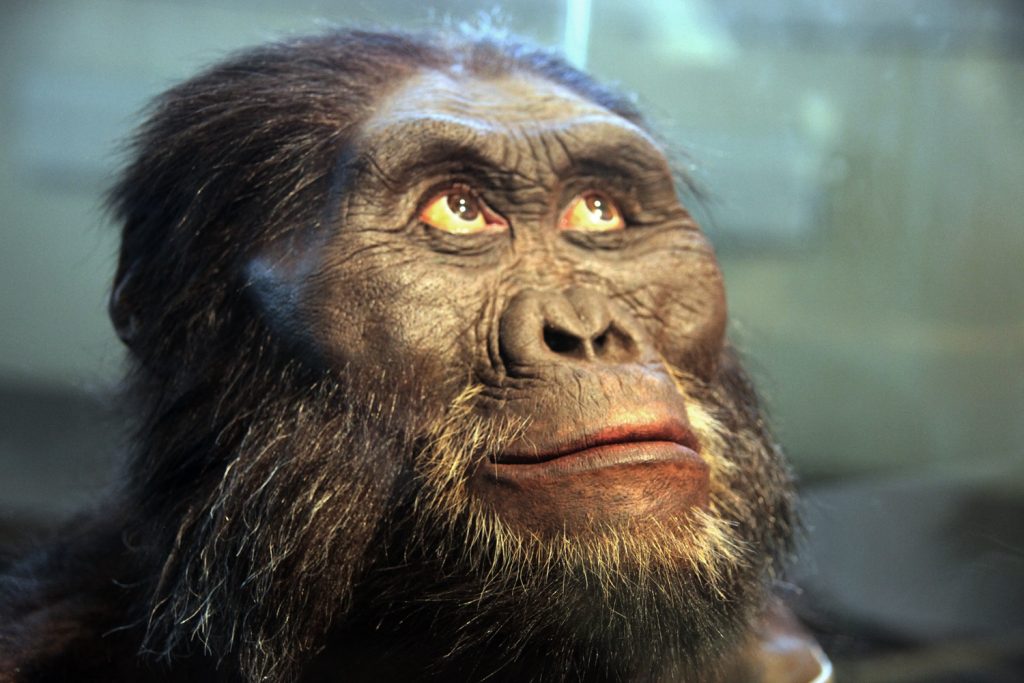 The species A. afarensis is one of the better-known australopithecines, with regards to the number of samples attributed to the species. The species was named by D. Johanson and T. White in 1978. This lead to a heated debate over the validity of the species (seen in a 1980 issue of Science), with the species, eventually being accepted by most researchers as a new species of australopithecine and a likely candidate for a human ancestor.

The “best known” specimen of afarensis is AL 288-1 (“Lucy”), a 3.2 million-year-old partial skeleton found in November 1974 at Hadar, Ethiopia. The afarensis can be separated into two chronological categories: early (3.9-3.5 myr) and late (3.5-2.96 myr). Early afarensis includes material from Laetoli and Belohdelie (and possibly Sibilot Hill), with later afarensis known mainly from Hadar and Maka. Other important specimens attributed to afarensis include the AL 333 specimens (such as A.L. 333-105), AL 444-2, AL 129-1A + 1B, the Laetoli footprints, and the type specimen for the species A. afarensis, LH 4.

The Hadar sample is relatively extensive and shows important differences with earlier samples from Laetoli. This species is also extremely important in that there is good evidence (from both the Laetoli footprints and examination of the lower limbs of the afarensis material) that the species was bipedal in a human-like manner (though not everyone agrees). This information for early bipedality “shook up” many complacent views about the origins of bipedality, but is less important (with regards to the earliest bipedal hominid) with the findings of earlier ramidus material that is also bipedal, and the idea that the ancestors of chimpanzees and gorillas were also likely bipedal.

One of the earliest sites often described as afarensis is the site of Belohdelie, Ethiopia. This sample consists of a large piece of the frontal bone and four associated cranial fragments. This material has been described as afarensis by B. Asfaw, and T. White finds the specimens very similar to the juvenile Laetoli vault pieces (LH 21) and Al 288-1.

However, with the discovery of the ramidus material, the specimens should be reexamined, and determined to one or the other, as ramidus shares many features with afarensis, yet is earlier, with some major differences.

The specimens show a frontal squama enclosing the frontal portion of the brain of a size similar to many chimpanzees and gorillas, however, there are several major differences between the Belohdelie material and one or both African ape species, including:

The Laetoli material was recovered at the site of Laetoli, Tanzania, about 50 km south of Olduvai Gorge, mostly between 1974 and 1979 by M. Leakey. Most of the material has been described by T. White. The remains mostly date from 3.76-3.56 myr, with LH 15 as young as 3.46 myr, and are mostly jaws and teeth, but also includes part of a child’s postcranial skeleton (LH 21).

The type specimen was selected from the Laetoli materials at the time of the species designation over the more complete Hadar specimens due to its distinctive diagnostic features. This specimen lacks the ascending ramus and contains nine teeth, with the roots of several others still in the mandible.

The Laetoli anterior dentition is among the most complete known for early hominids. The canines retain the primitive form of the marked difference between sexes, with the males distinguished by greater size and higher, more tapered crowns. The anterior teeth of afarensis are quite large, and among the largest known for any hominid, and similar to chimpanzees, although relatively narrower labioloingually. They differ from chimpanzees, however, in that the hominid maxillary incisors reflect the plesiomorphic condition in which the lateral incisor is much smaller than the medial one. The upper canines of Laetoli generally have 2 wear facets, and 3/4 of the remains show a diastema. Two of the Laetoli mandibles show incompletely erupted dentition, allowing a reconstruction of eruption patterns. These remains show an eruption pattern that is more hominid-like versus chimpanzee-like.

One of the more well-known remains from Laetoli is the Laetoli footprints. There have been many interpretations of the footprints, with different numbers and sex of individuals, and different ideas as to the form of locomotion used to create them. In the end, most people have come to accept the idea that the footprints were made by an afarensis approximately 3.56 myr, which was an obligate biped.

Features which show this include:

Other important sites where afarensis have been found include the 3.5 myr material from Turwel and the 3.4 myr Maka site. The material from Turkwel includes several wrist bones (WT 22944), which Carol Ward describes as very humanlike, specifically lacking any knucklewalking adaptation.

The anatomy of the carpal bones suggests enhanced finger mobility and powerful wrist flexion. This includes a powerful hamate bone indicating a carpal tunnel about twice the size of modern humans. This may indicate a powerful grip showing some arboreal activity still active in the species.

The Maka site has given up afarensis remains that include a proximal femur piece, two partial mandibles, a piece of an ulna, and an almost complete humerus. The femur shows a fairly large hominid for this time period (approximately 45 kg), and is usually assumed to be that of a male. The humerus shows a morphology very similar to that of the much smaller humerus from AL 288-1, showing a high degree of sexual dimorphism present in the species.

The most complete of the four Maka jaws is VP 1/2, which preserves many of the characters seen in afarensis material, including:

The Maka material is also important in that the proximal femur preserves definite signs of bipedality. These include features such as:

The paleoecology of the site seems to indicate a forest margin or savanna-woodland environment, a much different environment from the savanna-grassland environment initially assumed by many researchers. There also seems to be several important differences between the dentition of the early afarensis material from Laetoli, and that of the later material from Hadar.

These may be related to a different environment, and hence, different foraging opportunities, a change in behaviour, a continuation of earlier evolutionary trends, or sample error. The major difference between the two samples includes:

Various other specimens from other sites have been attributed to afarensis, with these designations less sure. This includes material from Allia Bay dating much later than the anamensis finds, material from the Omo region, material from Koobi Fora, and material from Sterkfontein.

The afarensis material is important in that it is the best known early hominid species (although as earlier anamensis and/or ramidus material becomes better known, it will lose much of its focus as the earliest known hominid material for which much is known). It shows decisive evidence for obligate bipedality and for the presence of evolutionary trends in its dentition and post-crania that seem to have it on the path to the modern human form.

This bibliography contains the sources of the information cited above, as well as any sources that could provide any other information on the subject. If you know of any other sources that are pertinent to A. afarensis, please e-mail me the citation in the format used below, and I will add it to the list.

Any problems with the information I presented above can be sent to me here. I don’t want to provide disinformation, and any corrections are gladly accepted (with proper documentation of what is wrong and why, with sources). Thanks!

Kimbel, W.H., T.D. White, and D. Johanson. 1984. “Cranial morphology of Australopithecus afarensis: a comparative study based on the composite reconstruction of the adult skull.” In American Journal of Physical Anthropology, vol. 64, pp. 337-388.

McHenry, H. 1998. “Body proportions in Australopithecus afarensis and A. africanus and the origin of the genus Homo.” In Journal of Human Evolution, vol. 35, pp. 1-22.