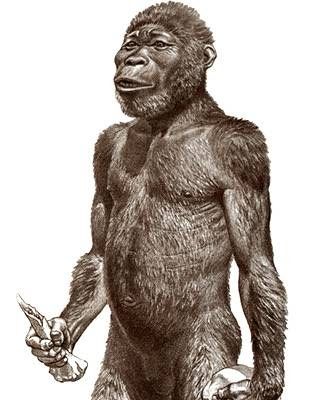 The species of Australopithecus africanus was named in a February 1925, issue of Nature by Raymond Dart. R. Dart was one of the pioneers of paleoanthropology and created quite a furore over the naming of the fossil specimen (the Taung Child skull and endocast) as a hominid.

The standard line at the time by some of the powerful figures in the field (e.g., A. Keith and O. Abel) was that the ancestors of humans should be found in Europe, and should have an enlarged brain and an apelike jaw (as was the case in the Piltdown Man hoax).

The claim that the specimen was a hominid was rejected by those who saw the material as that of a young chimpanzee or gorilla. This view was not helped by the difficulty in acquiring casts, the material was distant from many in the field (few of which ever travelled to actually view the material), and most importantly, was that of a juvenile. Juveniles are often misrepresentative of adult states, and most researchers claimed that the Taung Child would have developed into a chimpanzee or gorilla ancestor.

Due to the hostile or indifferent response of his peers, Dart never followed up the find with further excavations, and no other specimens of the species have been found at Taung. Dart dedicated himself to developing the anatomy department at the University of Witwatersrand, and it would be twenty years later when sites like Sterkfontein were found that corroborated Darts ideas.

Though the genus designation mixed both Latin (“australo”) and Greek (“pithecus”), the genus name has become accepted as the label by which the group of pre-Homo hominids in Africa have come to be known.

Dart claimed that A. africanus was bipedal due to the position of the foramen magnum, and was vindicated by later finds, such as STS 14, which showed unequivocally that africanus was an obligate biped.

The earliest africanus material comes from sites such as Sterkfontein, Makapansgat, Gladysvale, and Taung. This material dates to the end of the Early Pliocene, mostly between 2.9-2.4 myr, with the Sterkfontein Member 2 material (possibly afarensis or other species) being the earliest known possible africanus, dating to about 3.5 myr. The Sterkfontein material are problematic, as there may be intrusions from later strata, and there is a heterogeneous mixture of earlier and more modern faunal species, and thus, this material may be as young as 1.0 myr.

Most postcrania material attributed to africanus is well within the range of variation of the afarensis material, however, the limb proportions may be different. STS 14 is a 2.5 myr old specimen from Sterkfontein. This specimen is particularly important as it includes both os coxa, as well as many of the vertebrae. This find showed unequivocally that these hominids were bipedal, and were not simply apes, vindicating Raymond Dart.

Features of STS 14 that align it with a more humanlike locomotor capacity include:

While it is very similar in morphology (relative to its size), there are also differences. This specimen differs from a modern human in that:

There is a fairly large sample of africanus teeth known (though not as large a sample as the afarensis material). The material shows several important differences when compared to afarensis that include:

Postcanine teeth are larger, more bulbously cusped, and relatively broader (the size difference is greater in the later erupting teeth of each type), and may have somewhat thicker enamel, especially on the tooth walls.
Dm1 is larger and more squared, with more equal sized cusps.

Compared intrasex, the africanus central incisors show no reduction but the other anterior teeth are usually smaller. The ranges almost completely overlap, however, and there are very large canines and incisors in both samples.
No canines wear to have cutting edges (canine-premolar diatemata are rare), even though a few are large enough to project beyond the level of the other teeth (this is much more common in the afarensis sample).

Although the canines are reduced compared with the earlier Pliocene samples, their roots – especially those of the maxilla teeth – are still long and robust. The canines also wear more rapidly than the afarensis material, with the wear almost always on the tips. There is significant sexual dimorphism in the canines, although not as much as any of the apes, while there is sexual dimorphism on the level of gorillas in the postcanine material.

This pattern of big teeth seems to have been influenced by the africanus diet and chewing pattern. A. Walker and M. Wolpoff claim that the africanus chewing pattern is similar to modern hunter-gatherer groups, with the molars and premolars designed to last a lifetime of wear and tear (the oldest individuals dying at about the time they have no crowns left in their mouth – max-age about 35). The diet of these South African hominids seems to have been seasonal, with emphasis on a frugivory diet, with much seeds and other hard objects being masticated.

There is a good-sized sample of africanus crania, allowing reasonably strong comments to be made on the materials affinities to other material. Some of the better-known specimens include STS 5 (Mrs. Ples), a 2.5 myr cranium of an adult male with a brain about 485 cc, STS 71, a 2.5 myr male partial cranium with an estimated 428 cc brain, STW 505, an individual with a brain estimated to have been 625 cc, and the type specimen of africanus, the Taung Child. The facial features of the africanus material are a mixture of more modern and archaic ones, with similarity to (and important differences between) the afarensis material.

Some of these features (relative to afarensis include:

The accepted view seems to be that they deserve separate species status due to both their differences from the afarensis material and their geographic separation from them. However, a very important question in debate is whether or not this species contributed to the modern human lineage.

This bibliography contains the sources of the information cited above, as well as any sources that could provide any other information on the subject. If you know of any other sources that are pertinent to A. africanus, please e-mail me the citation in the format used below, and I will add it to the list. Any problems with the information I presented above can be sent to me here. I don’t want to provide disinformation, and any corrections are gladly accepted (with proper documentation of what is wrong and why, with sources). Thanks!

McHenry, H. 1998. “Body proportions in Australopithecus afarensis and A. africanus and the origin of the genus Homo.” In Journal of Human Evolution, vol. 35, pp. 1-22.

Tobias, P.V. 1992. “New researches at Sterkfontein and Taung with a note on Piltdown and its relevance to the history of paleo-anthropology.” In Transactions of the Royal Society of South Africa, vol. 48, pp. 1-14.