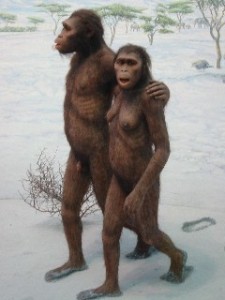 Australopithecus afarensis had been deemed a species and had been given the name in the year 1978 by Don Johanson and Tim White. The species is believed to be dating back to 4 million to 2.7 million years. The afarensis had been found consistently along the Northern Rift Valley in East Africa. More than 300 different individuals of afarensis in fragments have been found till date which includes a nearly full skeleton of “Lucy” an adult female.

Austrlopithecus afarensis had been quite slender and it is believed that they had been the ancestor of Homo and Australopithecus. Homo includes Homo Sapiens, the modern human beings. Lucy was the most well-known skeleton and at it had been 3.2 million years old when it was found by Donald Johanson and some of his colleagues.

The fossils of Australopithecus afarensis have been discovered in northern Africa and even though Laetoli is the locality for afarensis, most of the remains have been found in Ethiopia in the Afar Region which even includes Lucy and the complete family which had been found.

The other localities where the remains had been discovered are in Lothagam and Koobi Fora, Kenya, and in Beklohdelie, Fejej, Maka and Omo in Ethiopia.
Before 2.5 million years, the australopithecine species, had given rise to the Homo ancestor, which is still unknown. The earliest members of the Homo had been similar in appearance of australopiths and had coexisted for a million years with them.

These had evolved from the apes and they had features and traits of humans and apes. Their faces had been protruded like apes and they also had some amount of bodily hair. However, there were quite a lot of traits which set them apart from apes.

It is believed that australopiths walked upright for most of the time on their legs which is known as bipedalism. Also, they did not have large canine teeth like the apes. The hand bones which had been studied also suggested that they might have been one of the earliest to use and make the stone tools before 2.5 million years. However, quite a lot of scientists believe that only the members of Homo with larger brains would have the capability and hand skills in order to make those tools.

Although it is difficult to guess the social behaviour of the these extinct species, it is believed that they can be compared to that of monkeys and modern apes given the difference in the body size between females and males which is referred to as sexual dimorphism. There has been quite a lot of debate over this but it is believed that they might have lived in small groups like a family which would have consisted of a single male who would be dominant along with several breeding females.

As of now, there are no stone tools discovered which can be associated with Australopithecus afarensis and the current archaeological record of the stone tools dates back to around 2.5 million years.