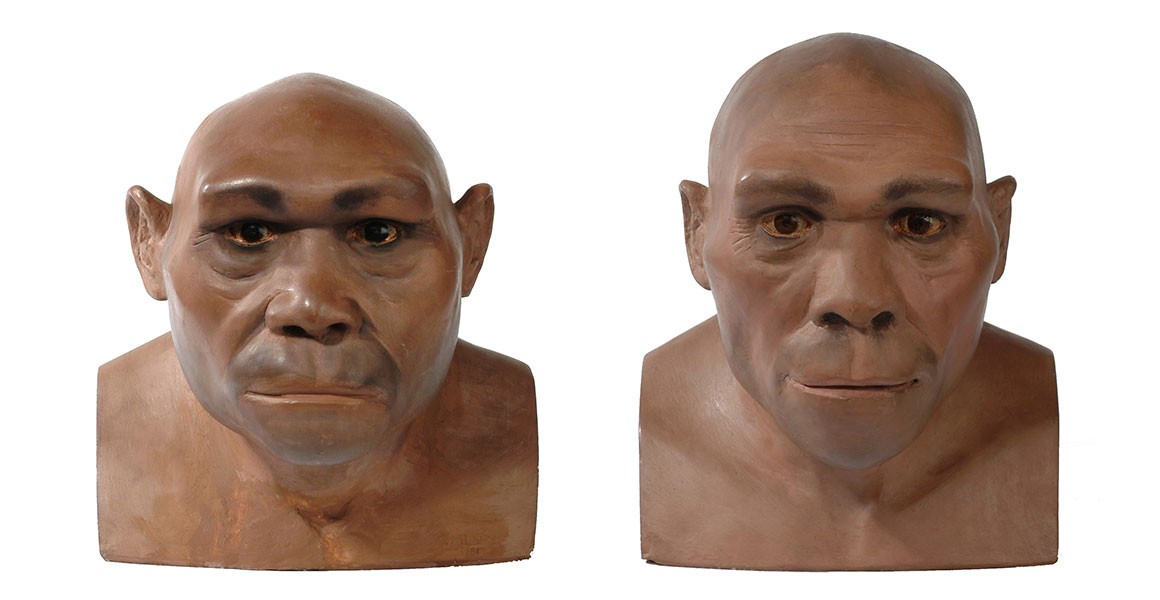 Throughout the early years of paleoanthropology, there were only two different species that were attributed to the genus Homo. These included the Neanderthals and Homo erectus. In the early 1960s, this began to change, and human ancestry began to be populated by many different players. Accordingly, erectus is one of the better-known members of genus Homo, especially in terms of its well-established place in paleoanthropology. This has begun to change, however, and now some question both the validity of erectus as a species and its place in human evolution.

Some (e.g., M. Wolpoff) claim that erectus is an invalid taxon, though few accept this interpretation at this point in time. Others believe that the material previously attributed to erectus should be split into several different taxons: Asian and later African material remaining as erectus (with erectus not contributing to modern humans), early African material as ergaster, and European material as heidelbergensis. In this description of the species H. erectus, the material that has been attributed as ergaster and erectus in the above splitting scenario will be covered, with the heidelbergensis material discussed under the page dedicated to that species.

The species was named by Eugène Dubois (originally designated as Pithecanthropus erectus) in 1894 after his 1891 find from Trinil, Java, in Indonesia (Trinil 2). Dubois was inspired by A. Wallace’s conviction that the origins of modern humans might lie in Southeast Asia. Dubois enlisted as an army surgeon in the Royal Dutch East Indies Army and searched for fossils in Sumatra. He had little success in Sumatra but found unearthed a thick mineralized hominid skull near the bank of the Solo River in Java. Dubois made his find public a few years later and was met by derision from the dominant British paleontological hierarchy. Dubois was disillusioned, and this important find actually spent some time in a box underneath the floorboards of Dubois’ home.

The material was later associated with the Chinese material from Zhoukoudian and renamed Homo erectus. Except for modern Homo sapiens, erectus was the most far-ranging hominid to have existed. Material that has been attributed to erectus has come from South Africa, Indonesia, and England, and just about everywhere in between, covering the entire continents of Africa, Asia, and Europe. The European material will not be discussed here (it is discussed under heidelbergensis), but the rest of the material will be covered hereunder erectus.

The dates for erectus have become earlier and earlier, while habilis remains have been found in later and later deposits, making a lineage involving habilis ancestral to erectus increasingly unlikely. Specimens that are considered erectus are dated very securely to at least 1.8 myr, and fairly securely to 1.9 myr. The question of this species evolutionary destiny is under some disagreement. Those who accept the validity of egaster usually consider erectus an evolutionary dead-end that went from Africa into Asia and went extinct there. Those who see erectus as a modern human ancestor, either see the Asian specimens as a dead-end side branch, or see all the ergaster, heidelbergensis, and erectus specimens as belonging to Homo sapiens.

This view has some validity in that these species are usually considered “chronospecies” due to anagenesis. Some researchers do not support the concept of anagenesis as a valid mechanism of speciation, since there is a “fuzzy” area where the transition between species occurs, whereas in cladogenesis (the splitting of a species into two new species or the branching off of one species from another) there is a “clear” boundary. However, the method of speciation is the same in both, since beyond the moment of the split in cladogenesis, the transition to new species is by anagenesis.

So this is really a matter of semantics and differing ideologies. In any case, erectus shows clear trends in the modern direction, and I personally think that the most parsimonious answer is that erectus is an ancestor of modern humans and not an evolutionary dead-end. However, that is just my personal opinion.

There are specimens from a wide time span and a vast geographical area that have been attributed to erectus. The traits of these specimens are very similar and show a trend toward the modern human condition.

Some of the trends linking erectus with sapiens include:

One of the most important erectus specimens is the Nariokotome boy, KNM-WT 15000. This specimen was discovered by a team led by R. Leakey and A. Walker at Nariokotome, Keny, in 1984. This is the most complete early human skeleton ever discovered. The specimen was dated to 1.6 myr, and is considered by some as ergaster, but to most researchers, it is definitely erectus. The relative completeness of this specimen allowed detailed examination of the anatomy of erectus, and has led to many influential ideas about this species.

Some of its important features include:

The narrow spinal canal has been an issue of much speculation. Some contend that this means that KNM-WT 15000 had small intercostal muscles (used for fine air control during speech in modern humans). However, this was a juvenile and the neurocanal size may have increased by 30% by maturity. Also, even though it has a small canal size relative to its body size, it is still within the modern human range (albeit, at the bottom). This is a very tenuous piece of evidence that has been used to make very specific statements about the early human capacity for speech.

Considering it is within the human range at all, it makes it unlikely that this would have prevented the capacity for speech, and since it is a juvenile specimen, sweeping statements about the species capacity for language based on this trait is very weak.

A very important specimen (especially in terms of the history of paleoanthropology) is KNM-ER 3733. This fairly complete cranium is responsible for sinking the single-species concept as a hard and fast rule. The specimen was found by a team led by R. Leakey at Koobi Fora, Kenya, in 1975. The specimen has been dated to approximately 1.75 myr. This is usually considered the remains of a female due to the decreased level of robusticity compared to conspecifics such as KNM-WT 15000.

Some of its key features include:

Another African erectus specimen is KNM-ER 3883. This specimen is thought to be a male from the same population that ER 3733 came from. It was found in the same area, Koobi Fora, Kenya. It has been dated to approximately 1.57 myr and is the best-preserved early male cranium.

Some of its features include:

The erectus specimens from China were some of the first hominids that were discovered. The various specimens from Dragon Bone Hill, in the cave of Zhoukoudian, were discovered in the late 1920s; however, all but two teeth that were sent abroad for analysis were lost in the chaos of WWII. The material included five skullcaps, several cranial and facial fragments, eleven mandibles, and 147 isolated teeth. This material was used for the reconstruction of “Peking Man” by F. Weidenreich.

A newer reconstruction has been made by I. Tattersall and G. Sawyer that uses fragments that are assumed to be male, as the original reconstruction used both male and female remains. The newer cranial reconstruction results in a larger cranial capacity with a more massive and projecting face, with a broader taller nasal region. This new reconstruction is more similar to erectus from elsewhere in the world. The material has been dated to approximately 400 kyr to 500 kyr.

The five skullcaps have a mean cranial capacity of 1043 cc. The supraorbital torus on the reconstruction is smaller than that of OH 7 or Sangiran 17 from Java. The Zhoukoudian occipital bones are strongly flexed with a broad torus across the bone’s width. The skullcaps are also characterized by flat, thick, rectangular parietal bones. The facial bones are massive, and the mandibles are very robust. The Asian specimens show some general differences from African erectus, including more robust ridges of bone with the walls of the skull greatly thickened.

The Javanese specimens are a source of great controversy. No specimen from Indonesia has been found in a well-dated locale. Often, they have been found by locals and bought by researchers or interested laypersons. More than one specimen has shown up in the hands of an interested layperson, for that person to be told by a paleoanthropologist that it is a fake. The older dates (ranging near 1.7 myr) are very controversial and very tenuous.

For example, the Modjokerto child was discovered by a hired workman in 1936, and the specimen was “dated” decades later by looking at the material that adhered to the cranium, and matching that matrix to strata based on the information of where the specimen was found, finding a strata that matched the material taken from the specimen, then dating the samples of stratum that were assumed to be where the specimen originally came from. It is methods like this that dates that are very early come from. Specimens like Sangiran 17 and Trinil 2 have been dated to approximately 800 kyr and 400 kyr, respectively.

The best preserved hominid cranium from Java is Sangiran 17. This specimen was discovered by a farmer at Sangiran, Java, Indonesia, in 1969. Sangiran 17 has been an important specimen for those who accept the multiregional hypothesis that has erectus moving into Asia early, and evolving into Homo sapiens with gene flow being maintained between various African, Asian, and European populations. In Indonesia, this hypothesized lineage begins with Modjokerto, moves on through Sangiran 17, the material from Sambungmachan, Ngandong, all the way through present-day Javanese.

Some of the traits that are cited to link this lineage together include:

The Sangiran 17 specimen itself shows several other features that distinguish the Indonesian material from other populations of erectus. Many of these also fit into the multiregional model.

Homo erectus (or the various species which may be subsumed under that appellation) are extremely important in the study of modern human origins. The Middle Pleistocene is where the modern human postcrania develop, the modern cranial features begin to develop, and significant increases in brain size occur. It is also important because many behavioural changes occur in this time period, e.g., much more developed lithic industries, the controlled use of fire, regular meat-eating, hunting, etc.

This is where the things most people consider “human” start to develop to the point where most people would recognize these pattern of anatomy and behaviour as human. This is also a dynamic time in the evolutionary perspective caused by these species, with the recent well-dated Dmanisi remains in the Republic of Georgia, dated to 1.7 myr.

This bibliography contains the sources of the information cited above, as well as any sources that could provide any other information on the subject. If you know of any other sources that are pertinent to H. erectus, please e-mail me the citation in the format used below, and I will add it to the list.

Any problems with information I presented above can be sent to me here. I don’t want to provide misinformation, and any corrections are gladly accepted (with proper documentation of what is wrong and why, with sources). Thanks!