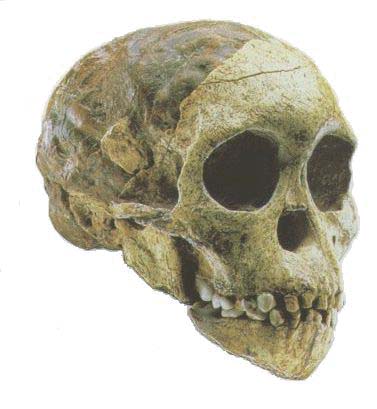 Given below are some of the most important fossils which have been found over the years.

Toumai had been discovered in the year 2001 by Ahounta Djimdoumalbaye in Chad in the Sahara desert. The age of the fossil is estimated at being around 6 to 7 million years and it is an almost complete cranium which has a small brain. It had several apelike primitive features like the small size of the brain, canine teeth and brow ridges.

The first family had been found in the year 1975 by the team of Donald Johanson in Ethiopia in Hadar. The age is around 3.2 million years. The fossils consisted of more than 13 different individuals of different ages. The sizes too vary considerably. The scientists still are not clear if the specimens all belong to one species where the males were much larger than the females.

These were discovered in Laetoli, Tanzania by Paul Abell in the year 1978. The age is estimated to be 3.7 million years. The entire trail consists of fossilized footprints of three hominids that were bipedal. Their stride and size indicate that they had been around 120 cm and 140 cm tall. Quite a lot of scientists believe that these footprints were identical to the modern humans while many others believe that the large toes were slightly diverged like apes. Tentatively, the footprints have been assigned to Australopithecus afarensis since no other species are known to exist at that time.

Taung Child had been discovered in the year 1924 by Raymond Dart in South Africa at Taung. The fossils include a complete face with jaws and teeth along with an endocranial cast of brain. The fossil is believed to be 2 to 3 million years old.

The teeth showed that it had been from an infant to around 5 to 6 years old. It is believed that the australopithecines used to mature faster than the modern humans and so the Taung Child could be around 3.  The canine teeth had been quite small and not really similar to apes and the brain had been large and rounded.

Also the foramen magnum position convinced most scientists that it had been a bipedal human ancestor and it had been named as Australopithecus africanus.