Koobi Fara refers mainly to the region located around the Koobi Fora Ridge which is located on the eastern part of the Lake Turkana. The ridge is an outcrop of the Pleistocene and Pliocene sediments and is made up of sandstones, siltstones and clay stones which preserve several fossils of the terrestrial mammals which also include the early hominin species.

At present, the ridge is eroding into the badlands terrain by several ephemeral rivers which drain into the the Lake. In the year 1968, Richard Leakey had established the Base Camp at Koobi Fora. The camp had beens set up on a sandspit which projected into the lake close to the ridge. This had been called Koobi Fora Spit. 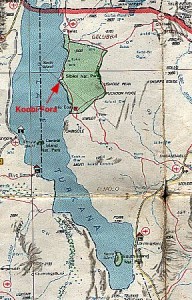 which shed some light on the human evolution over the last 4.2 million years. The non humanoid fossils exceed the humanoid fossils by great numbers which give a detailed look of the flora and fauna in the area as long back as Miocene.

Searching fossils in an area as large as this had been a major problem and the solution had been to organize all individuals in a group for a designated area. A method had been devised by Richard Leakey which provided better results. He trained and organized a team of locals which were known as the hominid gang. The group had been led by Kamoya Kimeu. This group discovered most of the hominin fossils which are more than 200 at present.

The stone tools in Koobi Fora

A large number of stone tools have also been found in caches and the surface of Koobi Fora which have their own dates but are rarely associated with the hominins. There are no other likely candidates who might have manufactured them.

However, the tolls are acheulean and Olduwan. Research at the area began in the year 1968 and several hominid fossils have been recovered from seven different localities in the region. The Koobi Fora site is 700 square miles of lacustine and fluvial sediments which present a continuous sequence of deposition right from the Pilocene dating back to 5 million years to Early Pleistocene dating back to 1 million years.
Since the year 1968 in July, quite a lot of fossils have been recovered from the area.

Australopithecus Sensu Lato is one of the hominid models which had been recorded as a chrono species dating back to 2 million years. According to the researchers, there had been very little morphological change during that period as was evident in the elements which had been preserved at the site in Koobi Fora.