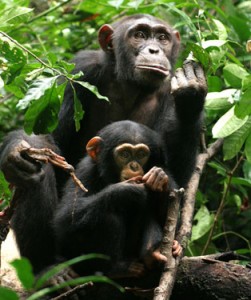 chimpanzees too have spent millions of years evolving on their own just like us.

Chimpanzees, or as they are commonly known to us, chimps are the closest living relations to human beings. There are two main species of chimps, the Bonobo which can be found in the forests of Congo and the common chimpanzee which are found in Central and West Africa. Along with orang-utans, humans and gorillas, chimpanzees belong to the Hominidae family. It was before 6 millions years that the chimpanzees split from the human evolution. Now they are considered to the closest living relations.

The evolutionary relationship between human beings and chimpanzees

Humans and chimpanzees belong to the Homininae family. Both of these species are the closest evolutionary relatives to us. Chimpanzees had shared a common ancestor with us before six million years ago and in the year 1973, Mary Claire King had found that there is a 99% DNA similarity between us.

However, today after several modifications, this commonality is believed to be around 94%. Some of the differences have occurred in the non coding DNG. Several scientists propose that Paniscus and troglodytes belong to the genus Homo with sapiens and not in Pan. Another argument for this has been that the some of the other species are reclassified and belong to the same genus based on less similarity in the genes than between chimpanzees and human beings.

The male common chimpanzee is around 5.6 feet in height when standing up and weighs around 70 kg. The female chimpanzees are smaller in size. The common male chimpanzee ahs long arms and when they are extended, they are longer than the legs and are as long as the height of the body. The bonobo chimpanzees are shorter and they are thinner but they have longer limbs. Both of these chimpanzees make use of their powerful and long arms for climbing trees.

They follow a very complex and highly civilized social relationship. Some adult chimpanzees, especially males can be quite aggressive at times. They are known to kill other chimpanzees and very territorial. They also take part in targeted hunting of the other lower primates like red colobus, bush babies and others. The meat from the hunting is used as a social tool for the community.