Gorillas are the largest among the living primates and they have been the subject of several studies and researches in connection to the human evolution. Gorillas are herbivores and mainly ground dwelling. They can be 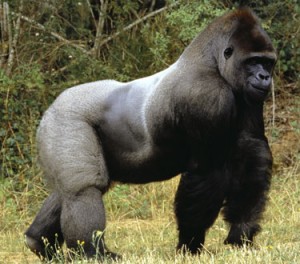 found in Central Africa and they are mainly divided in two species, although this is still debated. One of the most striking facts is that there is 98% to 99% similarity between the DNA of gorillas and humans and they are the closest relatives to humans after the chimpanzees. Gorillas mainly live in subtropical and tropical forests.

Humans and chimpanzees are the closest relatives of gorillas from which they had diverged before 7 million years. There is a difference of only 1.6% between human genes and the corresponding genes in gorillas. Till quite recently, it had been believed that there was only one gorilla species which had three subspecies- the Mountain gorilla, Eastern Lowland Gorilla and Western lowland Gorilla. However, now it is widely believed and there are two main species and two subspecies for each. The gorilla species are still very widely debated by biologists. The primatologists explore the relationships between the different gorilla populations and there is no conclusion reached yet for the species.

Silverback is a type of male gorilla which will be more than 12 years old. The name has been assigned because of the silver hair on the back of the gorilla. The male gorilla grows canine teeth which are large in size on maturity. The Blackbacks on the other hand are male gorillas which are sexually mature which can be up to 11 years old. The silverbacks are dominant and strong troop leaders. They lead troops and groups of up to 30 gorillas and are always the centre of attention in the troop. All the movements of the groups, conflicts, decision, safety, well-being and responsibility of the members of the troops are handled by the leader. The blackbacks serve as a backup for the troops’ protection.

When male gorillas are around 11 years in age, they begin leaving their troop and they either travel on their own or start their own troop with other males before they start attracting females and breeding. The infants stay with their mothers for around three or four years, but the male Silverbacks will care for the orphans. However, they never carry the young gorillas. When Silverbacks are challenged by other males, he usually screams, beats his chest, charge forward, bare teeth and break branches. In some cases, the younger male from the troop might take the leadership from an older male. When the leader of the troop is killed, the group generally splits up and look for a new leader.