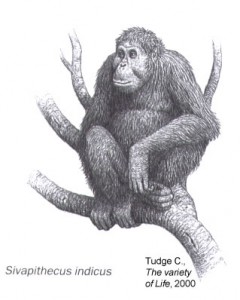 The subject of the evolution of modern man is very interesting and has been studied for decades by men. Biologists have classified and several other species and studied them for years like the great apes.

Some of the main species to be studied are the common chimpanzee, the bonobo, the eastern gorilla and the western gorilla, the Sumatran orang-utan and the Bornean Orangutan.

Sivapethecus belongs to the extinct primates and the fossil remains of the animals which have been assigned to the genus date back from 12.5 million years to 8.5 million years old. The fossils had been found in the Siwalik Hills in the 19th century which now lies in Pakistan, Nepal and India. Any of the species in the genus could have been the direct ancestor of the orang-utans that we see today.

Sivapithecus had been 4.9 feet in height and the size had been quite similar to the modern orang-utans. There were several physical attributes which resembled chimpanzees but the face had been closer in appearance to orang-utans. The shape  of the wrists and the other body proportions had been studied and it suggested that a large amount of its time had been spend on the trees as well as on the ground. Sivapithecus had heavy molars and canine teeth which suggested that its main diet might have been tough food like the savannah grasses and seeds.

As of now there are three main species which are recognized. The fossils of Sivapithecus indicus date back to 12.5 million years to 10.5 millions years. The S. Sivalensis had dated back to 9.5 million years to 8.5 million years and had lived in several parts of India and in Pakistan in the Pothowar plateau. The creature had been the size of a modern chimpanzee but the facial morphology had been close to an orang-utan and according to its tooth pattern, its diet might have been fruit.

A larger and significantly important species had been found in the year 1988 and had been called S. Parvada which dated back at 10 million years. The description of the fossil find had been published in the year 1982 and it had several similarities to the skull of modern orang-utan. At one point of time, the specimens had been assigned to the Ramapithecus genus but today it is not regarded as a likely human ancestor and quite a lot of researchers today believe that the Siwalik specimen would have been the Sivapithecus species.

Complete specimens of the Ramapithecus had been found in the year 1975 which showed that the species was less like human than what had originally been thought. There are theories which suggest that Ramapithecus was in fact the female Sivapithecus since there were several similarities between the two.

It has also been thought that they could be totally separate from the ancestors of humans, gorillas and chimps. However, the fossils of the actual ancestors have not been found yet by researchers so a conclusion has not been reached at.