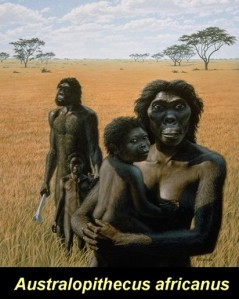 The fossil remains which had been found indicate that Australopithecus africanus had been more like the modern man than afarensis with a cranium which had been human like, brain larger in size and more common facial features. The Austrolopithecus africanus had been found in South Africa at just four sites in Gladysvale in the year 1992, Makapansgat in 1948, Sterkfontein in 1935 and in Taung in the year 1924.

The physical attributes of Australopithecus africanus has several physical traits similar to human beings. The arms were slightly longer than legs like the chimpanzees. The cranial features were more like humans but there had also been several primitive features like the curved fingers which were like apes for climbing trees.

Because of these primitive features, quite a lot of researchers believe that the hominin evolved to Paranthropus rather than being the direct ancestor. Australopithecus afircanus had more heavy features like robusus for chewing heavy food items like a gorilla. On the other hand, it also had the cranium which resembled quite closely to chimps. It is also believed that they had an intelligence like apes and their pelvis was built for better bipedalism when compared to ararensis.

According to Charles Darwin, human beings had evolved originally from Africa but in the 20th century, most scientists and anthropologists supported the belief that human beings had evolved from Asia. On the other hand, the Leakey family argued that the African descent was more likely since most of the hominid discoveries like the Laetoli footprints were all found in Eastern Africa. The fact is still not clear and still widely debated.

In the year 1925,February issue of Nature mentioned the species named Australopithecus africanus by Raymond Dart who had been the pioneer in paleoanthropology. This had created quite a stir over the name of the fossil specimen. At that time, some of the main figures in that field like O. Abel and A. Keith had mainly believed that the human ancestors would be found mainly in Europe and would have a jaw like apes and an enlarged brain.

It is generally believed that juveniles are not correct representatives of the adult states and most researches believed that Taung Child, which had been the most important fossils would have later developed into a gorilla or a chimpanzee ancestor.