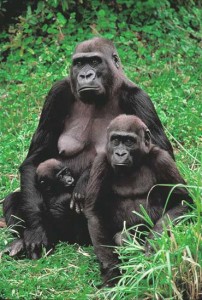 Gorillas are gentle, quite and very large apes living in the forests of Africa. Frequently, gorillas are portrayed and believed to be dangerous and aggressive but they are generally peaceful and shy vegetarians.

Gorillas, males as well as females have arms which are longer than legs. They have a wide chest and a bulky and short body. The gorillas have many senses which are quite similar to ours. The adult female gorillas are generally half the size of the male gorillas or the silverbacks. On an average they are 1.4 meters tall and weigh around 100 kg. There are quite a lot of gorillas who had been taught sign language in captivity and it had been observed that they were able to learn to communicate and even form a few simple sentences. Quite often, they have been taught to use tools which they have learnt to do quite impressively.

Every gorilla also constructs a nest every evening for the night where they will sleep.

The nests are bowl shape and are generally made from plant material like leaves. These nests are shared only by the female gorilla and the nursing infant. The population of the local gorillas is often estimated easily by the scientists by counting these nests.

The gestation period in gorillas is 8 and a half months. There are generally three or four years between the births and the infants stay with the mother for around three or four years. The female gorillas mature at 10 or 12 years of age. The lifespan of the gorillas is around 30 to 50 years, though there have been a few exceptions. In the recent years, gorillas have also been known to engage in face to face sex which had earlier been a unique trait to the Bonobo and humans.

The gorillas are very closely related to human beings and they are considered to be very intelligent. There are quite a lot of gorillas who had been taught sing language in captivity like Koko.