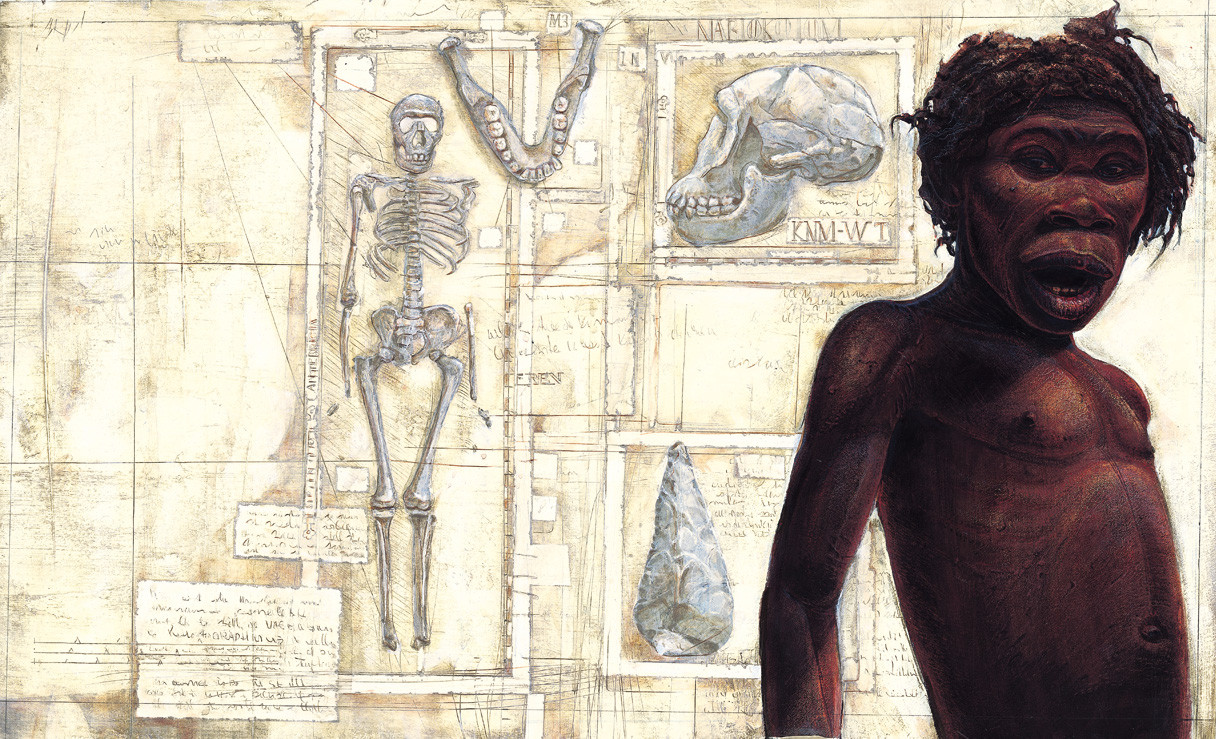 Homo ergaster is one of the more problematic of somewhat accepted species designations currently tossed around in anthropological literature. Each individual researcher that sees ergaster as a valid taxon sees different specimens as belonging or not belonging to the taxon. Many researchers deny any validity to the species at all.

On the whole, though, most researchers see too little difference between ergaster and erectus to form the basis of a species of the former, separated from the latter. As a general rule of thumb, one can consider most attributed ergaster specimens to be early erectus geographically confined to Africa (however, this is not a hard and fast rule).

The taxon ergaster was first described in 1975 by C. Groves and V. Mazak. The specimen attributed as the type specimen was ER 992, an isolated mandible. Since then, other specimens have been attributed by various authors to ergaster, with most researchers placing the same fossils in erectus.

The most significant feature of ergaster, is that those who see it as a valid taxon, tend to see it as more closely resembling modern H. sapiens than does H. erectus. They tend to see ergaster as a direct ancestor of modern humans with erectus being an evolutionary dead-end. Many Out of Africa supporters use this taxon as evidence that Asian and European specimens did not contribute genetically to the modern human genome, but this claim is very weak.

The type specimen for ergaster is KNM-ER 992. Groves and Mazak claimed that the mandible was significantly different from H. erectus to deserve its own species designation. However, they did not compare it to H. habilis, and the mandible may actually belong to that taxon.

The specimen showed some periodontal disease, as seen by absorption of bone around the roots of the teeth. The mandibular symphysis also shows strong markings for the digastric muscle (important for swallowing and vocalization), which some people have interpreted as proof of language by this time.

One of the most spectacular and important paleoanthropological finds in recent years was the Nariokotome Boy (KNM-WT 15000), by a team of researchers led by Richard Leakey and Alan Walker. This find represents the most complete early hominid ever found, with almost the entire cranium, and most of the postcranial material intact.

This specimen has been attributed as a male ergaster by some, though most place it in H. erectus, and that is where it will be discussed in detail. Other specimens that have been attributed to ergaster include KNM-ER 3733, SK 847, and KNM-ER 3883.

Several researchers have tried to define the difference between ergaster and erectus, P. Andrews and B. Wood among the more prominent. P. Andrews defined seven autapomorphies that were characteristic of erectus, but which ergaster supposedly lacked. However, G. Bräuer has shown that these are not autapomorphies.

For example, some erectus do not possess these features, while some ergaster and some habilis do. Also, some of these autapomorphies are not independent traits, and should not be considered separately (e.g., frontal keel and parietal keel).

B. Wood lists seven traits that link ergaster with H. sapiens, and that distinguish ergaster from erectus:

However, these synapomorphies have been convincingly challenged by showing them to be present in erectus populations from Asia. Also, more recent analyses by other researchers seem to indicate that even if ergaster specimens are considered as a different taxon than erectus, the erectus material is still closer to modern humans cladistically.

In short, H. ergaster does not show significant promise of lasting as a separate taxon due to several factors. It has not been shown to be significantly different from erectus to require the designation of a new hominid species, and it has not been shown to be closer to modern humans morphologically as has been claimed by some. At this time, ergaster basically means early H. erectus from Africa.

This bibliography contains the sources of the information cited above, as well as any sources that could provide any other information on the subject. If you know of any other sources that are pertinent to H. ergaster, please e-mail me the citation in the format used below, and I will add it to the list.

Any problems with the information I presented above can be sent to me here. I don’t want to provide misinformation, and any corrections are gladly accepted (with proper documentation of what is wrong and why, with sources). Thanks!