The naming of a new species is almost always controversial, and Australopithecus garhis is no exception. Named on April 23, 1999, issue of Science, the large research group that discovered the finds made some broad claims and supposition that is definitely not accepted by all.

However, any real acceptance of these claims and/or hypotheses will have to come later on, as time enough passes for the information has been fully disseminated, others have had a chance to examine the remains, and the dust has settled.

The remains that are directly attributed to the new species come from the Hatayae Member of the Bouri Formation, Ethiopia, and have been dated to approximately 2.5 myr. The type specimen of the species is BOU-VP-12/130, an associated set of cranial fragments comprising the frontal, parietals, and maxilla with dentition.

The specimen was discovered by Y. Haile-Selassie on November 20, 1997, and the word garhi means “surprise” in the local Afar language. These specimens are important no matter what the eventual final attribution because the remains are from East Africa at a time when there are minimal remains (2.0-3.0 myr). 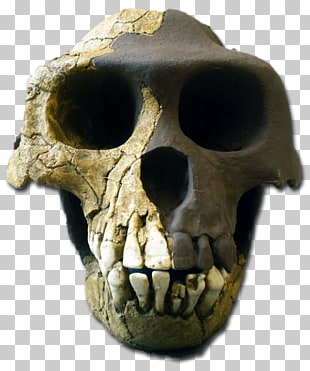 One of the more striking features of the A. garhi remains is the size of the postcanine dentition, which is at or beyond the nonrobust australopithecine or A. robustus extremes. This is the only feature that suggests any link to the robusts, and as such it is very unlikely that the specimen is in any way derived from or a sister species to robustus. This is seen especially in the large size of the anterior teeth, exceeding those of the largest australopithecines and far exceeding the robusts, who are marked by anterior tooth reduction or stasis.

Based on tooth size, the garhi material seems to fit well with schemes that see either one or both of africanus and afarensis as a direct human descendent, as the canine-to-premolar/molar size ratios are comparable to both species and early Homo.

The lower face is prognathic with procumbent incisors.
Canine roots are placed well lateral to the nasal aperture margin.
The premaxillary surface is separated from the nasal floor by a blunt ridge and is transversely and sagittally convex.
The palate is vertically thin.
The zygomatic roots originate above P4/M1.
The dental arcade is U-shaped, with slightly divergent dental rows.
The temporal lines encroach deeply on the frontal, past the midsupraorbital position and likely met anterior to bregma.
The postglabellar frontal squama is depressed in a frontal trigon.
The localized frontal sinus is limited to the medial one-third of the supraorbital surface.
There is marked postorbital constriction.
The parietal bones have a well-formed, bipartite, anteriorly positioned sagittal crest that divides above lambda.
Cranial capacity of approximately 450 cc (reconstructed).

There is not much to conclude at this point, merely to explain what the researcher’s hypothesis as the possible phylogenetic relationship of A. garhi. The researchers discuss the idea that garhi represents a direct ancestor of modern humans that is derived from Africanus which is likely derived itself from afarensis. This does fit in with Wolpoff’s idea of an unidentified late Africanus group with many robust features, but no one can say with any certainty at this point. The specimens may even be attributed to Homo rather than Australopithecus. All that can be done now is to watch what unfolds.

This bibliography contains the sources of the information cited above, as well as any sources that could provide any other information on the subject. If you know of any other sources that are pertinent to A. garhi, please e-mail me the citation in the format used below, and I will add it to the list. Any problems with the information I presented above can be sent to me here. I don’t want to provide misinformation, and any corrections are gladly accepted (with proper documentation of what is wrong and why, with sources). Thanks!